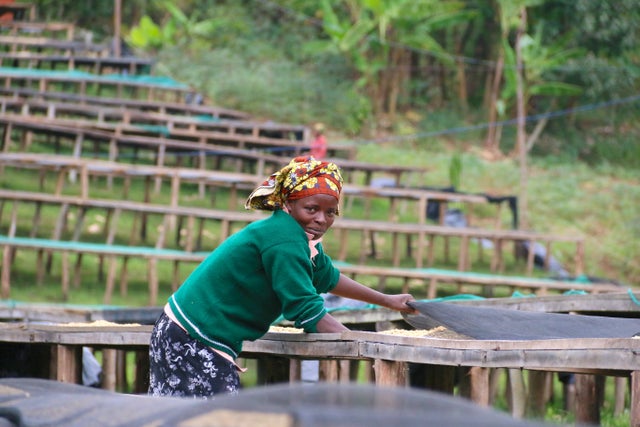 The Vunga washing station was built in March 2009 and currently has 278 active members, of which 196 are men and 82 are women. The cooperative is managed by Daphrose Uwimana, who is the president and leader of this group of coffee farmers who live in the Nyabihu district, northwestern Rwanda. Vunga is not far from the borders of Uganda and the Democratic Republic of the Congo (DRC). The station receives its water from the natural source of the famous Virunga Mountains, which is also home to one of the few remaining groups of mountain gorillas.

In Africa, it is uncommon for a woman to be the president and leader of a cooperative, and Daphrose has done an excellent job, as Vunga placed twice in the final round of the Rwanda Cup of Excellence, in 2012 and 2014.

In addition, they have been severely affected by natural disasters almost in consecutive years, 2018 and 2020; but even so they have managed to continue producing one of the best coffees we have cupped in Rwanda and without a doubt, our best washed Rwanda this year.

Under Daphrose's administration, efforts have been made to increase payments per kg of cherry (Vunga US $ 0.33/kg vs. national average US $ 0.25/kg), increase the number of African beds and improve the general infrastructure , as well as offering bonuses and medical insurance to coffee growers.

Unfortunately, on May 6, 2020, heavy rains hit Rwanda, causing floods and landslides that have killed at least 65 people and caused incalculable amounts of property damage. One area that was particularly affected was the Nyabihu district, home to the Shyira and Vunga washing stations, as well as the more than 200 families who work there. The Nyabihu district alone has experienced the tragic deaths of 28 farmers from the floods, as well as the loss of more than 325 homes, livestock and coffee trees, with damages estimated at $ 132,000.

The green coffee is delivered in transparent and resealable 0.5 kg, 1 kg, 2 kg, and 5 kg protective bags.